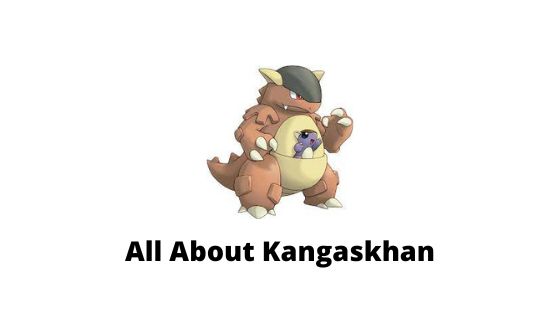 You are here: Home / characters / All about Kangaskhan from Pokemon

Pokemon is one of my favorite anime that I watched in my childhood and always dreamed of becoming a pokemon trainer and working alongside Ash and his teams in training pokemon and winning pokemon matches. But before training a pokemon one should know everything about that pokemon and in the pokemon anime, there are many pokemon with different abilities one such pokemon is Kangaskhan. It is a very cute and popular pokemon from the anime and here in this article, we are going to give every ins and outs of this pokemon. So stay till the very last to know everything about this Pokemon.

Kangaskhan is known as the Parent Pokémon, it is a large female-only species of pokemon that resembles a kangaroo. It has a brown hide with several raised patches and a cream-colored belly, cream-colored ears, red eyes, and a rounded snout with two fangs in the back of its upper jaw, there is a thick black plate on the top of its head. On the belly it has a pouch that contains a baby, it has three clawed digits on each hand and foot and a thick tail.

As a baby, it is light purple and has smooth skin, and rest there is no change in any form with a grown-up. The baby rarely leaves the pouch only until it is three years old.

It is a nurturing Pokémon that protects its young at all costs. This Pokemon can move really fast, even with the baby in its pouch. It will violently attack anything that it sees as a threat to its young, regardless of how badly injured it becomes, the mother will not cease fighting until its young is safe. It uses quick jabs to intimidate its enemies.

It is a Parent Pokemon that loves to take proper care of its baby and other species’ babies too so the major Kangaskhan weakness is fighting, it is not a fighting Pokemon so it rarely fights.

This pokemon doesn’t evolve but they turn into mega form, as a mega-kangaskhan, the mother appears unchanged, the baby temporarily grows and gains some new features, and it gets raised patches on its knees the patches can be seen aligned horizontally along its waist with a larger patch on its belly, small spiked growths appear underneath its ears.

Yes, Kangaskhan is a good pokemon that loves its baby and even helps other pokemon babies and takes proper care of them.

Yes, Kangaskhan is a rare pokemon that raises its children in its pocket.

what type is kangaskhan?

It is a normal type of pokemon introduced in Generation I. THis pokemon doesn’t evolve but can get mega form.