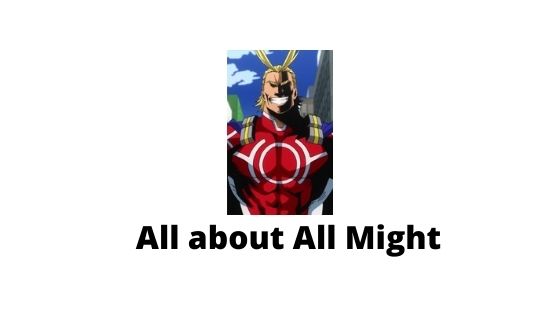 You are here: Home / characters / All about All might

While My Hero Academia is all about Deku and his friends who are going to be the future pro heroes but this article is about their beloved teacher Toshinori Yagi aka All might who was the former no. 1 hero and is considered the pillar of hope and justice for heroes currently he is a teacher of foundational Hero Studies at U.A. High School. Here in this article, we are covering everything about this pillar of hope, from his quirk to his strength and much more about All might.

When All might was at peak of his powers he used to be a very large man with a muscular and well-defined physique. His costume is a skin-tight blue bodysuit decorated with a red symbol that somewhat resembles a “Y,” designed with a white diamond at its center, in his costume, there are white lines that trace from his chest to his back shoulders: the lines are trimmed with the aforementioned red wing symbol. He wore a gold belt that had a silver buckle with red eyes, has spiked fins on the sides of his arms, and wears shin-length gold boots. The below image shows his hero costume. After All might’s fight with All For One he sustained permanent damage his health reduced and he is now a very skinny man with sharp, angular features and long limbs, spouting blood from his mouth when excited or surprised. He wears loose clothing to accommodate the change in body mass between forms. His post-fight image is shown below. 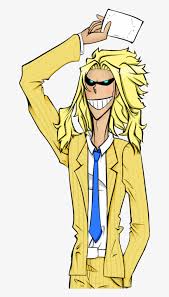 In his hero form, All Might has the charisma that attracts everyone to him. He always protects and saves innocents, with a huge smile. All might is very friendly, understand everyone, and talks with a smile with his fans. He is an understanding teacher he understands his students and tries to help them in every possible way. In his true form he avoids attention and is reserved and solemn after his retirement he stayed in true form and was okay with attention and interaction.

Like every One for All hosts, All might was quirkless at the beginning. But after having One for All the strength, and speed of the user but at the beginning the new user can’t handle One for All for his weak body and to adopt One for All Toshinori Yagi did develop his body to be at that level with hard work and dedication. After getting serious damage from All for One he was still a better hero than the rest and at his peak he was uncomparable he is the only hero who has defeated All for One twice. Neither the previous wielders of One For All were able to do so.

What was all might’s original quirk?

All might is one of the strongest superheroes with high power and speed, but all these powers are not his original powers these are the quirk that he got from his successor who passed him one for all. Originally all those who had one for all were quirkless they don’t have any power.

In episode number 4 of My hero, academia Deku first time met All might and that was a fanboy moment for him but soon after that Deku found All might’s original form, and after seeing Deku’s will he passed One for All to him.

All about Rock Lee