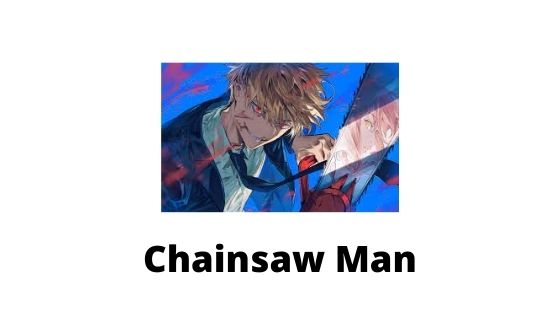 The most major question in 2022 for every anime lover is when is Chainsaw man anime coming out and the answer is going to be sometime in 2022 but not updated the exact date. We are looking closely at it when is it going to release and when you can watch this awaited chainsaw man anime by MAPPA animation. Chainsaw man is a very popular manga that is written and illustrated by Tatsuki Fujimoto. It was serialized in Shueisha’s Weekly Shōnen Jump magazine from December 2018 to December 2020. As the anime episodes are being released weekly we are adding the link in this article from where you can download Chainsaw Man Anime.

The story revolves around a 17-year-old young boy Denji who has a simple dream to live a happy and peaceful life, spending time with a girl he likes. But this is not the reality for him as he is down with cash so is forced by the yakuza into killing devils using his pet devil Pochita as a weapon in order to pay off his debts.

In an unfortunate event, Denji is murdered by a devil in contract with the yakuza. However unexpectedly Pochita merges with Denji’s dead body and grants him the powers of a chainsaw devil that helps him to transform parts of his body into chainsaws. Using these new abilities Denji the Chainsaw man quickly and brutally dispatches his enemies.

These situations catch the eyes of official devil hunters who offered him to work at the Public Safety Bureau as one of them and help them in killing more enemies and achieving his dreams.

After merging with Pochita Denji, Denji can pull on the cord emerging from his chest and can transform into Chainsaw Man. Denji has high strength he can easily throw a car without any trouble. He is able to manifest chainsaws from his arms, legs, and head that can easily cut through the devil, but for the full transformation, he needs blood.

Denji is a young devil hunter working for the Yakuza so that he can clear his debt, after getting betrayed by Yakuza which leads to his death, he gets a second chance at life as the mysterious Chainsaw Man who is taking revenge on his enemies and further saving the city. Even without being a Chainsaw devil, he is a good unarmed, and armed fighter.

A loyal devil pet of Denji that merges with Denji to save his life. Later on, they both become together Chainsaw Man and killed devils. After fusing with Denji, Pochita is able to communicate with him in his mind, prior to this Pochita solely communicates through barks and whines.

Makima is the head of Public Safety Division 4 who takes Denji into the bureau after he becomes Chainsaw Man. Makima is ruthless and normally emotionless, she will do whatever it takes to reach her goals.

A subordinate to Makima and a reluctant colleague of Denji who has a topknot and a distaste for Fiends. He had contracts with the Curse Devil, Future Devil, and Fox Devil. He, later on, got killed and possessed by the Gun Devil, thus becoming a Gun Fiend.

Power is an angel from the Middle-order of the Christian Angelic Hierarchy. Power is a part of Public Safety Devil Hunters under Makima’s squad. She is a childish, greedy, and self-motivated blood devil.

Chainsaw Man manga is still ongoing, The manga is written and illustrated by Tatsuki Fujimoto. As of now, the manga has completed its first arc and it is published in Shueisha’s Weekly Shōnen Jump from 2018 to 2020. The first arc has finished with eleven volumes comprising 97 chapters. And according to the author, the second arc will be out by the early Summer of 2022 in Shonen Jump.

As of December 2021, the manga had over 12 million copies in circulation. The manga has also won the 66th Shogakukan Manga Award in the shōnen category.

Who is Denji’s girlfriend?

Technically Makima is not his girlfriend. For Makima Denji is nothing more than a pet and tool that she uses only for her benefit on the other hand Denji loved Makima to the fullest.

The MAPPA released the full trailer of the anime in June 2021, which shows the tiny teases of the manga’s best arcs and the Chainsaw Man look. The trailer that you see here is from the official youtube channel and this is Chainsawman anime trailer 2 which was released on August 5, 2022.

On February 12th, 2022  MAPPA at the Jujutsu Kaisen event officially announced that they will be releasing Chainsaw man on October 2022 on television. And on 11 October 2022, we got the very first episode of Chainsaw man.

If you have not watched Chainsaw man episode 1 then this article is for you here we gave you the link from where you can easily download Chainsaw man anime and then watch it for free in HD quality. So without wasting any time here we have a download link to Chainsaw man.

Where to watch Chainsaw man anime?

The release date of the chainsaw man anime is not set yet but according to the rumors going on it is set that the anime may most likely be streamed on Netflix or Crunchyroll.

How many episodes will chainsaw man have?

As Chainsaw man is one of the most popular manga and the manga has covered the major arcs so we can say that Chainsaw Man season 01 will have 24 episodes.

Who is directing the Chainsaw Man anime?

Ryū Nakayama who has directed Black Clover and Jujutsu Kaisen episodes is directing the anime at Mappa, Tatsuya Yoshihara is the action director of the anime.

Chainsaw man is not over yet the manga is ongoing. The final chapter of the chainsaw man was published in December 2020, but it included a surprising teaser at the end. In the teaser we can see after losing many of his friends in the Public Safety Division in the battle against its captain Makima, he emerges victorious after a while, Denji decides to enroll in high school and pursue a formal education but still fights against devils. From this, we can say that there will be another arc of chainsaw man that will mostly focus on Denji’s school life.

This is all we have to date regarding Chainsaw Man as we get further updates about the anime we will add them here. Stay tuned with us and let us know if you have any updates via comment.