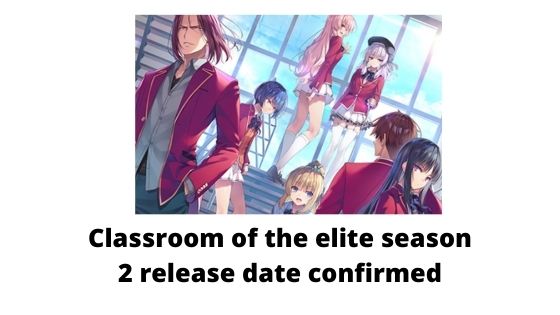 You are here: Home / new release / Download Classroom of the elite season 2 English Dub and Sub

Yes, the hype is for real, The officials have confirmed that Classroom of the elite season 2 is coming out soon in 2022 but there are many questions that arise with the announcement. Here in this article, we will discuss all about season 2 of the anime and where you can watch it and try to answer all the questions regarding the anime series. The more interesting fact here is not only season 2 but Classroom of the elite season 3 is also announced. Season 1 was released in 2017 and was one of the best anime of the year.

Before going through the news regarding season 02 let’s see

What is the classroom of the elite about?

The anime is set in the distant future, the Japanese government has established the Tokyo Metropolitan Advanced Nurturing School. The institute’s main aim is to train the generation of people that will support the country in the future. The protagonist of the anime is Kiyotaka Ayanokōji, an introvert, a quiet and unassuming boy who comes with unrivaled intelligence. Kiyotaka is a student of class D the section where the school dumps its inferior students. Everything started changing for Kiyotaka After meeting Suzune Horikita and Kikyō Kushida, and this scattered his thought of the ideal normal high school life.

Ayanokojie Kiyotaka is the protagonist of the series. He is a second-year student of Advanced Nurturing High School and was in class D where the students who scored low points in the entrance exam were placed. He is a socially awkward person who is terrible at communicating with people and fails at correctly associating with them.

Karuizawa is the girlfriend of Kiyotaka Ayanokōji and is considered to be the girl leader of Class D. When somebody meets her for the very first time will see that she is a girl strong personality and is a somewhat spoiled child but as they know her will find that she is very logical and astute with a sharp mind and has skills to make the correct decision according to the situation.

In anime, the major thing that anime fans look at is the animation studio, director, writer, and Voice artists of the show as they judge the standard of the anime with the director, and writer, as well as the soothing voice of the characters, make the anime more interesting.

The latest trailer of season 2 is from March 2022 this is only the PV and we will update it in the future you can watch the trailer down below.

Here we have all the episode download links for Classroom of the elite S02. You can directly download the episodes from the link given below or you can watch them online.

Episode 01: Remember to Keep a Clear Head in Difficult Times

Episode 02: There Are Two Main Human Sins from Which All the Others Derive: Impatience and Indolence

Episode 04: The Material Has to Be Created

Episode 05: Every Failure Is a Step to Success

Episode 06: Adversity Is the First Path to Truth

Episode 07: To Doubt Everything or to Believe Everything Are Two Equally Convenient Solutions; Both Dispense with the Necessity of Reflection.

Episode 08: The Wound Is at Her Heart

Episode 09:  If You Make a Mistake and Do Not Correct It, This Is Called a Mistake

Episode 10: People, Often Deceived by An Illusive Good, Desire Their Own Ruin.

Episode 11:  A Man Who Cannot Command Himself Will Always Be a Slave

Episode 12: Force Without Wisdom Falls of Its Own Weight

This is all we have for you regarding  Classroom of the elite season 2 from the above links you can easily watch and download all the episodes of the anime.

Which Volumes Will Season 2 Cover?

what chapter did the classroom of the elite end?

Classroom of the elite season 1 ended with covering volume 3 which is chapter 27  of the novel series and season 2 will start with volume 4.

Is the classroom of the elite over?

No, The classroom of the elite novel series is still going on the latest volume was released on 10 May 2022 and it is the 11th volume of this novel series.