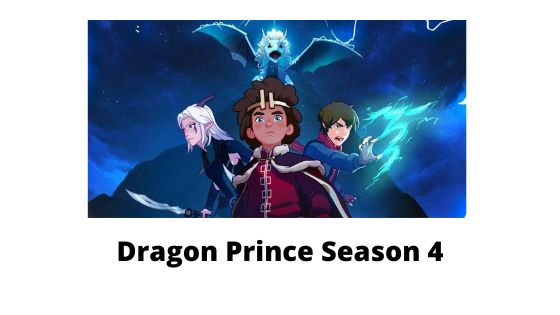 The only question running across the internet is when is dragon prince season 4 coming out, the dragon prince season 4 release date, and many more like these types. So we thought of giving you good news regarding this anime, yes season 4 of dragon prince is coming, and not only season 4 but we are also going to get seasons 5, 6, and 7 too which will be called The Dragon Prince Saga. So now let us share with you everything we know about dragon prince.

This is a Netflix Original animated fantasy series created by Aaron Ehasz (former head writer of Avatar: The Last Airbender) and Justin Richmond.
The story revolves around prince half-brothers Callum and Ezran and the elf Rayla, who take care of the infant dragon prince Azymondias and they must end the thousand-year-old conflict between the human kingdoms and the magical creatures of the land of Xadia.

What will The Dragon Prince Season 4 cover?

We hope that you watched the first three seasons of the anime then only read this part if not then skip it. Season 4 will also be known as Book 4: Earth. The story will start with a big-time skip, picking up two years after the Battle of the Storm Spire that ended last season. There is finally peace across the lands.

In this season We’ll find Ezran now fully stepped into his role as the king of Katolis, with Soren and Corvus acting as his Crownguard. And Callum has taken over the post of High Mage, and every single character getting evolved. The season deals with Viren being resurrected, but has only 30 days to live unless he and Claudia successfully free Aaravos from his prison and Claudia is finding out the long-lost location of the prison to save her father, even if it means doom for all the land.

The trailer of season 4 is here you can watch it and enjoy it.

The first update regarding dragon prince season 4 came in February 2021 and we are following the officials for the upcoming updates, we can predict that season 4 will come out in November month of 2022.

Where to watch Dragon Prince season 4?

As the anime is Netflix original, the first 3 seasons were released on Netflix so this season and upcoming seasons will also come on Netflix.