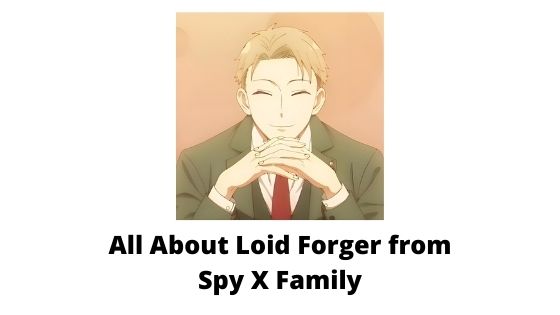 You are here: Home / characters / All about Loid Forger from Spy x family

Spy x family recently got animated and season 1 of spy x family anime is getting positive reviews and appreciation from fans, every fan is excited to know more about their favorite character from Spy X Family anime, there are many characters in the series and one of the characters is Loid Forger. Here in this article, we have given a detailed biography of Loid Forger from the Spy X family and facts about him.

Loid Forger is the main protagonist of the SPYX FAMILY series, to work for his country and serve his motherland Loid discarded everything about himself and is working as an undercover spy codenamed as “Twilight”.

For his current mission, Loid was required to marry and have a child, so he married Yor Briar and adopted Anya Forger as their child.

Loid Forger is a 27-year-old male who has short blond hair, blue eyes, and light skin. Loid Forger has a height of around 187 cm and has an athletic body. He normally wears a light green three-piece suit with a red tie when seen outside and has a lapel pin on his left lapel, in the shape of a dagger that has a symbol of WISE on it. When at home he wears a plain white t-shirt with long black pants.

As a spy he is very dedicated to his job and is cool and efficient, As a spy, he can do anything for his job from joining terrorist organizations to dating his target’s daughter to becoming a father. In the past Loid was a powerless war orphan, feeling despair and isolation motivated him to become a spy who can create a world where children wouldn’t have to cry. As a child, Loid was an innocent honest child who rarely lied to his parents.

Loid “Twilight” Forger trained for more than 10 years to be a spy he trained very hard and he acquired certain new skills and sharpened his current skills.

Disguise: The major skill needed for a spy is his skill to disguise and is one of that spy who is considered a master of disguise he can perfectly disguise his as well as his voice and is not at all recognized by his near ones too.

Speed: He is super fast with his speed he can take down multiple people without much trouble.

Strength: Loid “Twilight” Forger is very powerful he can beat 3 people at a time with his bare hands, can easily pull a heavy child stuck in a gutter with just one arm over his head, and land him on his feet.

Loid and Yor are married to each other not because they love each other but both married each other because of their personal reasons. As we go through the manga we can see that their relationship has improved throughout the course of their fake marriage and we can hope that they will be together as the story progresses.

Yes, Anya forger is adopted, Loid adopted her but Anya thinks that she is the biological daughter of Loid and Yor Forger. Anya was used as an experiment by the Ostanian government that gave her the ability to read minds.

Who is the voice actor of Loid Forger?

Takuya Eguchi is the Japanese voice actor who gave voice to Loid Forger, Takuya is a very famous voice actor in japan who has voiced in the animes like Haikyuu, Tokyo Revengers, and many more. Alex Organ is the English dub of Loid “Twilight” Forger.