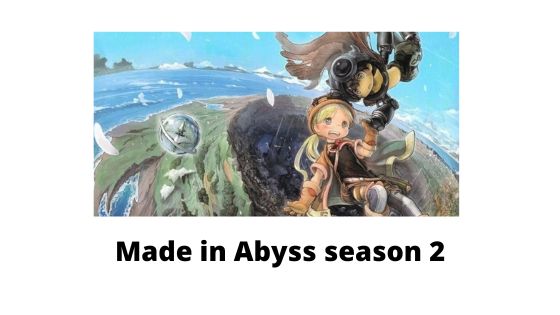 You are here: Home / new release / Download Made in Abyss season 2 All Episodes HD

Made in Abyss is a fantastic adventure anime series with fantasy elements that revolve around Riko, the daughter of the missing White Whistle Lyza, the Annihilator. Riko’s dream in life is to follow in her mother’s footsteps and become a White Whistle. One day, she finds a robot that resembles a human boy in the second layer of the Abyss and names him Reg. Riko and her friends were successful to sneak Reg into Belchero and quickly welcome him into their close-knit group.

Sometime later, a number of findings are made from the depths of the Abyss, including Riko’s mother Lyza’s White Whistle and pages of discoveries and observations she had made, as well as a message written for Riko, stating that Lyza is waiting at the bottom of the Abyss. After finding this Riko is determined to find her mother, bids farewell to her friends, and secretly departs into the Abyss with Reg as her companion for the upcoming adventures.

The official team of Made in Abyss launched their next trailer of season 2 and here we have added the source from where you can watch the trailer.

Made in Abyss season 2 release date

Where to watch season 2 of Made in Abyss?

Season 2 is going to have 12 episodes and will be streamed internationally on HIDIVE. Muse Asia has got the right to distribute season 2 in Asian regions outside Japan.

Made in Abyss- The Golden City of the Scorching Sun has been released and if you are eager to watch the anime then here we have Made in Abyss season 2 download link.

Episode 01: The compass pointed to the Darkness

Episode 02: Capital of the Unreturned

Episode 03: Village of the Hollows