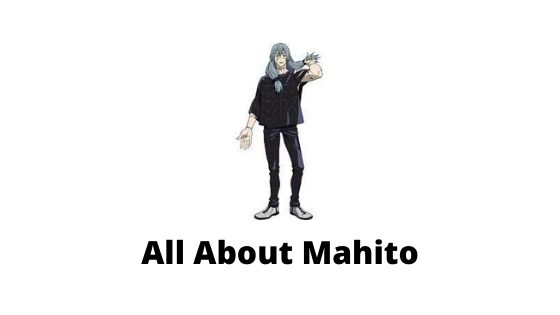 You are here: Home / characters / All about Mahito from Jujutsu Kaisen

Mahito is the major antagonist of the Jujutsu Kaisen series, He is a special grade cursed spirit that was born from human transgressions. He considers himself the very manifestation of humans’ hatred of each other. Is allied with a team consisting of Suguru Geto, Jogo, and several others. The ultimate goal of the team is the eradication of humanity and replacing the population with cursed spirits. Now let us go through the details about Mahito from Jujutsu Kaisen.

He is a human-looking cursed spirit with a patchwork face and has heterochromia that causes his left eye to be dark blue and his right eye to be gray. He has stitches all across his body that seem like his body is sewn together, has long grayish-blue hair that reaches past his neck, and is tied into three large strands at the ends. He wears a black shawl that is separated into three pieces on the left sleeve and also wears matching pants with white shoes.

He is a sadistic Cursed Spirit who enjoys toying with human emotions. Mahito believes in the cause of reviving Sukuna is more important than his own well-being. He befriended Junpei because he saw him as a toy that could be fun to play with and nothing else.

He is a big believer that the human soul came before the body and is intrigued by the very nature of the soul. He is like a child that enjoy hurting others when there was no danger to him but is fearful when the consequences of his actions finally caught up with him.

He is considered to have power equivalent to Sukuna’s fingers. He is more dangerous than any other cursed spirit as he keeps on evolving and is intelligent like humans. Mahito uses the Idle transfiguration cursed technique with this he can see and understand the soul’s composition and modify it as he wishes, and can even reshape a person’s soul by touching their body.

This is not only what he can do with this technique, he can also use it to combine multiple souls and make a new one that is Soul Multiplicity. With his Idle Transfiguration, he can modify his soul and accordingly change the shape of his body that can be used for healing and regeneration.

During his fight against Nanami and Itadori, which almost killed him he unlocked Domain Expansion that is called Self Embodiment of Perfection, this expansion amplifies the cursed technique.

How old is manito?

As per the reference from manga and anime we get to know that Mahito is a very young cursed spirit and has not much fighting experience only in his fight against Nanami and Itadori he was able to unlock domain expansion so we can say that he is very young maybe around a year old cursed spirit only.

What curse is Mahito?

Mahito is a very young and unregistered Special Grade cursed spirit that has immense power so we can’t say much about him.

How does Mahito die?

During his fight against Nanami and Itadori, Mahito accidentally touched Sukuna’s soul and got the warning to not do it again but he did it again despite the warning so Sukuna waves his finger, dealing a massive wound to him.

Is Mahito from Jujutsu Kaisen dead?

The cursed spirits are never dead they can be exorcized so Mahito is not dead but exorcized by Kenjaku.