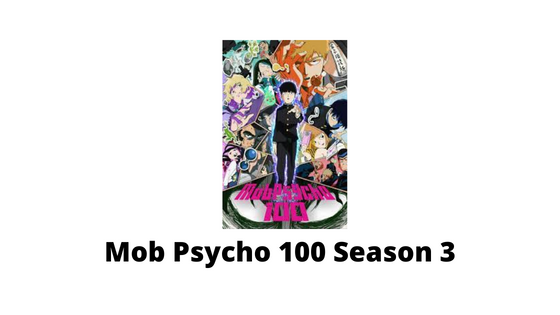 If you have not watched previous seasons of this anime then I suggest you watch that first and you will definitely love these 2 seasons and then season 3 of Mob Psycho 100. We have added every information about season 3 and have also given the link from where you can download mob psycho 100 season 3.

The story of Mob Psycho 100 revolves around Shigeo Kageyama an introverted schoolboy nicknamed Mob who is very shy to deal with real-life problems like a normal person and is trying to deal with them. Despite this Mob is a powerful esper with immense psychic power whose powers get out of control when emotional. To learn how to control his abilities, Mob works as an assistant to con man Reigen Arataka, a self-proclaimed spirit medium.

The trailer given above shows a preview of what we can expect from the coming season and it looks very interesting, engaging, and enjoyable to watch.

The first season aired between July and September 2016, followed by a second season, which aired between January and April 2019 and the third season is all set to release on October 5, 2022. BONES is the studio house that is going to produce the 3rd season of the anime and has come up with a new video showing the title sequence to the third season.

Episode 03: Getting Carried Away

No the story of the anime is not over yet the story is getting continued with the release of season 3 in 2022.

where to watch mob psycho 100?

If you want to watch the anime then you can watch 2 seasons of the series on Netflix or Crunchyroll.

How many episodes of mob psycho 100 are there?

As Mob Psycho 100 S03 new episodes are released every week we are trying to upload the proper link for the episode from where you can easily download it. We also answered many questions regarding the anime, especially regarding mob psycho 100 season 3.