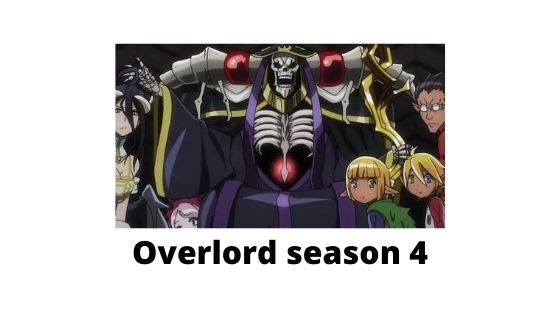 All the Overlord fans had a major question will overlord get season 4, here is exciting news for you all, Overlord season 4 is coming out in 2022 and we have covered all the details about Overlord season 4 anime from release date to characters and much more. Overlord, also known as Ōbārōdo is based on a successful light novel that is written by Kugane Maruyama and illustrated by So-bin. Let us first discuss more about Overlord and then in detail about Overlord anime season 4.

The story starts in the year 2126 when gaming is rising and taking new turns but all of sudden a popular online game Yggdrasil servers are about to shut down. Momonga one of the players of the game finds himself transported into YGGDRASIL, He tries to explore the world in an attempt to figure out what has happened and later on tries to make a new world in this video game.

What Will Overlord Season 4 Be About?

The fourth season will be the continuation of the third season. The third season had twelve episodes where Ainz furthers his quest for power while he seeks the Giant of the East and the Demon Snake of the West. We also saw the Baharuth Empire feigning allegiance to Lord Ainz before their attempted betrayal of him and his Sorcerer Kingdom. This betrayal leads to the battle of Nazarick and Re-Estize, which leaves Gazef dead and others witnessing the true powers of Lord Ainz. Season 4 will be about how the Sorcerer King will proceed in his pursuit of world domination.

Number of seasons of Overlord

The Overlord light novel series has 9 volumes and 2 manga series volumes. And as of August 20, manga and light novel has more than 1.5 million copies in circulation in Japan which makes it a popular light novel.

Overlord is written by Kugane Maruyama and is illustrated by So-bin, which was serialized online in 2010, before being acquired by Enterbrain.

Who is the director of Overlord season 4?

Naoyuki Itou is the director of Overlord season 4, who is well known for the first Kanon series released in 2002, and Digimon Data Squad. Naoyuki Itou is directing season 4 under Madhouse studio.

Which Studio Is Handling the Animation?

Madhouse a well-known anime production is handling the animation for Overlord season 4. Madhouse is a famous production house well known for animes like Death Note, One Punch Man, and Parasyte.

Who are the Voice artists of Overlord anime?

Voice artists play an important role in anime and here we have listed the information about the voice artists of Overlord.

When is overlord season 4 coming out?

The Overlord team on 8th May 2021 announced the fourth season of the series Overlord, and now the Overlord season 4 release date is finalized, season 4  aired from July 5, 2022, to September 27, 2022. After season 4 Overlord movie is likely to come too in the year 2023 which makes the news more interesting.

Season 4 is already out and if you have not watched it yet then you must watch it soon. Here in this article, we gave the Overlord season 4 download link from where you can watch or download season 4 of Overlord.

Episode 04: The Ruler of  Conspiracy

Episode 05: In Pursuit of the land of dwarves

Episode 12: Invasion of the Royal Capital

Episode 13: The Witch of the Falling Kingdom

Season 4 was released on the 5th of July 2022 and we have added all the information about season 4 from its episode download links here in the article. Hope this article has answered all your questions about season 4 of Overlord.