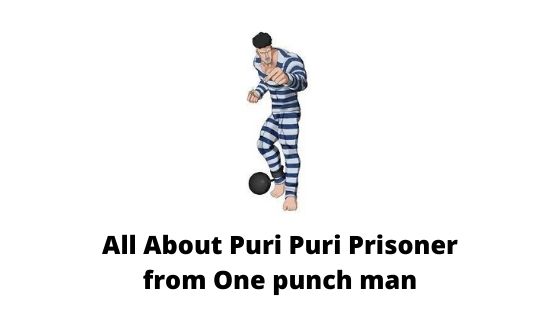 You are here: Home / characters / All About Puri Puri Prisoner from One Punch Man

One-Punch Man is one of the most loved anime specially Saitama the protagonist of the show is very much loved by the fans, Saitama is a strong human being who aims to be a hero and can defeat anybody with a single punch but these not that this anime got there are many characters in the show from top s class heroes to low c class heroes and many different kinds of villans everybody has it’s own backstory and unique powers.

One such character is Puri Puri Prisoner there are many questions regarding Puri Puri prisoner like what are his strengths, What happened to him, and much more. Here in this article, we tried our best to cover everything related to him, this is the biography of Puri Puri prisoner.

Puri-puri Prisoner is the 17th-ranked S-class hero from the Hero Association. He is also the boss of the prisoners held in Smelly Lid Prison.

Puri-Puri is a homosexual superhero who openly shows interest in other good-looking male heroes and criminals this interest has also to his titular jail sentence, as he kept sexually assaulting the criminals. He is a very down-to-earth, kind, and very polite S class hero as compared to other heroes, this can be demonstrated when Puri Puri took the time to inform Saitama about the late seer Shibabawa during an S-Class hero meeting.

He is always there for other Heros and backs them whenever possible this can be justified through an internal dialogue at the time of the fight with Deep Sea King he didn’t want to see any more heroes get hurt. Apart from these characteristics, he is very absent-minded too.

Puri Puri prisoner is a very powerful individual who blows holes in the body of a Dragon-level monster. Some Physical Abilities of Puri-Puri are that he has:

He has different fighting styles which are:

Puri-Puri Prisoner Angel Style: In this form, Puri Puri increases his body’s muscle mass and his strength that causes all of his clothes to tear out, and with this strength, he defeats his enemies in a flurry or barrage of punches.

Angel Rush: Here he leaps towards his opponent and the mirage of an angelic pair of white wings appears behind him, then unleashes a flurry of punches on his opponent.

Dark Angel Rush: This is a revised form of Angel Rush here every punch is unleashed with an aim to kill. here his illusory angel wings are colored black, rather than white.

Angel Dash: He uses his speed to run fast.

Angel Crawl: Here he combines his bristle armor and vibrations to “swim” underground with great speed.

Vibration Angel: Here he uses his shaking body from accumulated damage to increase the power of his attacks that allowing him to channel his bodily osculations through his fists to bolster his striking force.

According to the makers they have never said anything about this character but through the story, we can see that his male cellmates eventually turn against their leader in retaliation for years of abuse which shows that he is offensive.

Does puri puri know about Saitama?

There is no direct reference in the manga or anime that states that Puri Puri and Saitama know each other, it was seen in one of the episodes that Puri Puri was friendly with Saitama but he never stated anything about Saitama’s power.

This is the complete detailed biography about Puri Puri prisoner one of the top-class heroes from the One punch man series. Here we listed all the information about him and some interesting facts that you may not find anywhere else.

All about Loid Forger