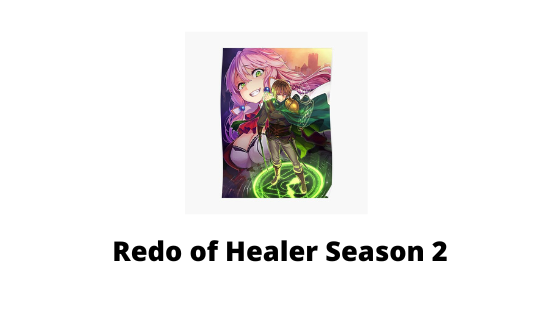 Redo of Healer is the light novel written by Rui Tsukiyo and illustrated by Shiokonbu. It was published by Kadokawa Shoten on July 1, 2017, and currently has 9 volumes. The story is about Keyaru who is a hero with healing power. His healing powers allowed him to secretly collect the memories and abilities of those he treated, gradually making him stronger than anyone else. During this process, he was subjected to years of endless hellish torture and abuse. And to bring his life back to normal Keyaru decided to unleash a powerful healing spell that rewound the entire world back four years into the past to get revenge on the ones who abused him.

Keyaru is also known as Keyaruga is the main protagonist of the anime and is the Hero of Healing. Initially, Keyaru was a very kind and gentle boy with dreams but after the betrayal, Keyaru’s kind personality changed completely to that of a man vindictive, cruel, brutal, unstable, psychopathic, and sadistic.

Nayuta or well known as Setsuna is a female Demi-human slave that Keyaru bought in Lanarrita and recruited into his party. After she and her tribe were taken as slaves she developed a strong hatred toward humans and takes great pleasure in killing Jioral Kingdom knights.

Kureha Clyret is a former knight of the Jioral Kingdom. She is highly renowned as the Blade Goddess and Sword Saint. Kureha is an honorable woman with a strong sense of justice. She condemns all matters of wrongdoing and evildoers and willingly compromises her own safety to ensure others.

The redo of Healer season 1 was released on 2017 and the first 3 volumes were covered in season 1 and season 2  of the anime will cover the remaining 6 volumes of the light novel. The redo of Healer season 2 release date is not confirmed yet but we hope that it will fall in late 2022 or early  2023. As we get exact information about season 2 of the anime we will share it with you.

The latest trailer of the anime is not out yet but we have this trailer of season 1 that you can watch and enjoy about what anime looks like.

Where to watch Redo of Healer?

If you are planning to watch the anime or want a recap before starting season 2 then you can watch it on HiDive.

Is the Redo of healer on Netflix?

No, the anime is not available on Netflix, HULU, or Amazon Prime. For the US audiences, you can watch it on HIDIVE and or Singapore, Malaysia, Indonesia, Thailand, and the Philippines, it is available on the anime streaming platform ANIPLUS.

Is the redo of the healer good?

It depends on your perspective in my view this is an extremely dark revenge fantasy. Here the protagonist gets heavily abused in the most horrible ways you can imagine. So if you are okay with watching abuse then this is a good pick for you.

How many episodes does Redo of Healer have?

How Many Episodes Will Season 2 Have?

Season 1 of Redo of healer has a total of 12 episodes. So we can expect that season 2 will have at least 12 or more episodes.

If you had questions like when is redo of healer season 2 coming out or where to watch it then this article is for you here we have answered these questions and also given many details regarding the anime.