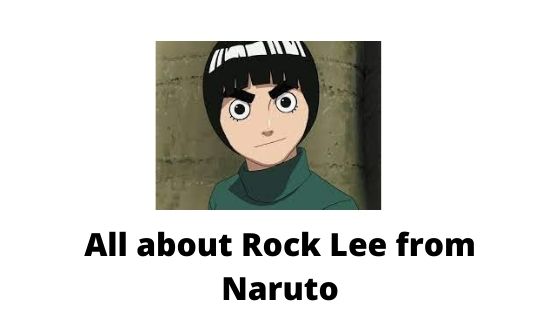 You are here: Home / characters / All about Rock Lee from Naruto

Naruto is one of the most famous anime in the world it made everyone love the Shonin anime with its story and character development, there are many characters in Naruto, and one of the most loved anime is taijutsu master Rock Lee. In his first appearance, he was shown as a funny character from team Guy who lack the skills necessary to use ninjutsu or genjutsu and was attracted to Sakura at the very first moment. He became one of the famous characters in Naruto after his match against Gara from the sand. Now let us get into more details about Rock Lee from Naruto.

Lee is shown as a funny character he always wears a green jumpsuit, orange leg warmers, and a red forehead protector that was gifted to him by his master and idol Mighty Guy. He has a bowl-cut hairstyle, round eyes with prominent lower eyelashes, and very thick eyebrows He carries a small book around with him containing advice from Guy-Sensei. Over time appearance of Lee remains the same.

In the anime Rock Lee is shown as a hard-working, optimistic, energetic nice guy who always works hard under his sensei’s guidance, He always believes that no one can beat a hardworking and dedicated person. Lee never breaks his promises and if barely the promise is broken then he goes under arduous training so that he can prevent it from happening next time. Lee always found Neji his teammate as his rival and always tried to be better than him. Rock Lee had feelings for Sakura Haruno who later became a good friend to him.

Lee is considered the youngest taijutsu master he has no ninjutsu or genjutsu skills, because of this he was always looked down on but under the guidance and hard training of his master Mighty Guy. He has super physical strength that could unearth a massive tree root from the ground. He always fights with heavy ankle weights still he is super fast and not even Sasuke with the Sharingan was able to react to the moves. When the weights were removed he became the first person to bypass Gaara’s Shield of Sand and strike him.

After learning this style for Mighty Guy, with each gate he opens, Lee’s strength, speed, chakra levels, and bodily functions increase tremendously, but these gates cause strain and potential physical damage to him. At the age of 12 Lee learned to open five of the Eight Gates, the sixth gate at age 17, the seventh gate sometime after the Fourth Shinobi World War, and by his adulthood, Lee mastered the final gate. Now let us go through all the 8 gates.

1. The Gate of Opening: Opening this gate allows the user to perform the Front Lotus, It is located in the left hemisphere of the brain.

2. The Gate of Healing: It is located in the right hemisphere of the brain, this gate increases the user’s physical strength and helps in re-energizing the body.

3. The Gate of Life: It is located on the spinal cord, after opening this gate the user’s skin turns red, pupils disappear, and their hair stands on end. With this gate, the user can perform the Reverse Lotus.

4. The Gate of Pain: After opening this gate user’s speed get increases and his muscles start to tear, This gate is located on the spinal cord.

5. The Gate of Limit: It is located in the abdomen, It increases the strength of the user.

6. The Gate of View: Opening this gate allows the user to perform the Morning Peacock, this gate creates an aura around the user and it is located in the stomach.

7. The Gate of Wonder: This gate is located below the stomach, after opening this gate the user can perform the Daytime Tiger, a single punch that creates a pocket of compressed air.

8. The Gate of Death: The final gate is located at the heart, This gate helps the user in granting the power a hundred times greater than they are usually capable of. After opening this gate the user can perform the Evening Elephant and Night Guy.

When Rock Lee consumes as little as one drop of alcohol, He becomes an unpredictable and nearly unstoppable force of destruction. Alcohol gives him considerably great speed and dexterity, allowing him to strike and effectively dodge from various positions.

Gaara VS Rock Lee: The Power of Youth Explodes! is considered one of the best episodes and one of the best fights in Naruto reason being everybody wants to know how this funny-looking green-suited boy fights and he made it to the mark with taijutsu as his weapon. Everyone thought that Gaara can win the match easily but that was not the case Rock Lee gave him a tough fight with his speed and who can forget the super weight loss flex by Rock Lee which increased his speed and he gave the super-fight against Gaara and all other started admiring him.

This is a show where our main hero is not Naruto but Rock Lee, this anime is adapted from the Naruto spin-off manga created by Kenji Taira. The anime was announced in February 2012 and has in total of 51 episodes. As of March 2015, all 51 episodes are available for online streaming in the US through Hulu and Neon Alley in English dubbed and subtitled formats.

Who does rock lee marry?

This is one of the most asked questions by the naruto universe fans who is married to Rock Lee and mother of Metal Lee, as we all know that Rock Lee always had a crush on Sakura but they ended up being friends, not life partners, and the next female character who likely to be Rock Lee’s wife is Tenten but later on, it became clear that Tenten is not married yet. Some assumed that he never married so we can’t say the confirmed answer yet.

Who is White Fang of the Leaf