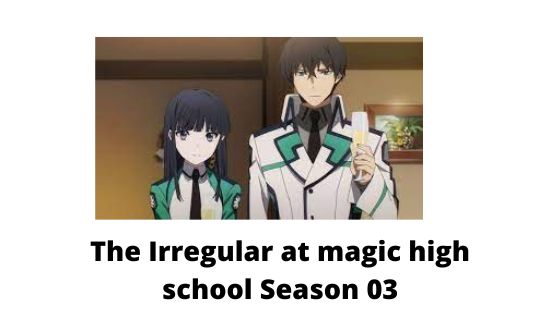 It can’t be denied that the anime fever is as high as the K-drama fever there are many anime fans across the globe who are always there to discuss new releases the story and debate the topic. Once you start watching anime there is no going back you just love the storyline and incredible moments.

The story is based on the light novel by the same name and it revolves around Tatsuya Shiba, a bodyguard to his sister Miyuki Shiba who is the candidate to succeed in the leadership of the Yotsuba clan, one of the Ten Master Clans that govern Japan’s magicians. Both the siblings enrolled in First High School which segregates its students based on their magical abilities.

Miyuki is considered the best student and was enrolled as a first-course student whereas Tatsuya is in the second course as everybody thought that he has no skill at all. However, after some time Tatsuya’s technical knowledge, combat abilities, and unique magic techniques changed the views of the people and were considered irregular to the school’s standardized rankings.

Shiba Tatsuya is the main protagonist of the series, He enrolled at the National Magic University Affiliated First High School in 2095 with his younger sister. He was accepted as one of the students to be placed in the Course 2 curriculum.

Miyuki is the biological sister of the main protagonist, Shiba Tatsuya and just like him, She is a student of First High School. Miyuki is a lovely, beautiful girl who captivates whoever sets their eyes on her.

What Will The Plot Of The Irregular at Magic High School Season 3 Be?

The third season of the anime is likely to cover the Double Seven story arc. The story will follow Tatsuya and Miyuki into their second year and will feature a student named Takumi Shippou. Takumi is the one who holds a grudge against the twins, Kasumi and Izumi Saegusa, causing conflict throughout the story.

In this season, First High becomes the target of Zhou Gongjin and the Saegusa clan and Tatsuya has to juggle many things like tackling Takumi’s arrogance, saving First High, and much more.

The Offical trailer of season 3 is not out yet but still for your enjoyment we have added season 2 trailer here.

Made in Abyss season 2 release date!