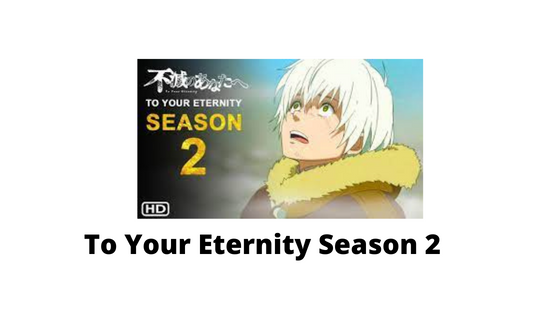 You are here: Home / new release / To your Eternity Season 2 release date Confirmed

To Your Eternity is a shounen anime and manga series that is written and illustrated by Yoshitoki Oima. The story is about an immortal being Fushi, who can take on multiple forms like an orb that turns into a rock, then a wolf, and now he is turned into a human to understand what it means and what it’s like to be human.

To your Eternity Season 1

Here at the very start, Fushi takes the form of a rock, then a dying arctic wolf who is mistaken as a pet by a boy named Joaan, after the boy dies from an infected wound, Fushi takes his form and travels south to the land of Ninannah, and meets a young girl called March and from here the adventures and action begins.

Fushi is an immortal being created by the almighty and placed on Earth to preserve the world. Fushi is an immortal being that can mimic the form of anything that has provided him with sufficient stimuli. When it was first dropped onto the Earth, Fushi was merely a featureless white sphere. Without consciousness, it copied the first thing it came into contact with, a rock.

March is a young girl from Ninannah who became Fushi’s mother figure. March is playful, inquisitive, and highly excitable, preferring to play “house” with her dolls and Parona, and make “food” out of the mud. Initially, her dream was simply to become a mother, and she often expressed her impatience with growing up.

To your Eternity Season 2 Trailer

The Officials released a trailer earlier this year, showing snippets of season two, as well as giving us information regarding its studio change.

Where to watch to your eternity?

If you are willing to watch this anime then you can watch season 1 on Crunchyroll and the second season will also be released on it.

Will there be a season 2 of To your eternity?

Yes, there going to be season 2 of the anime the exact release date is not fixed but it is going to fall in 2022.

How many episodes does To your eternity have?

Season 1 of the anime has in total of 20 episodes and To your eternity 2 will likely have 20 episodes too.

Here have added everything about season 2 of To your eternity from the release date to all the information about the anime and the characters of the anime from season 1 and season 2.