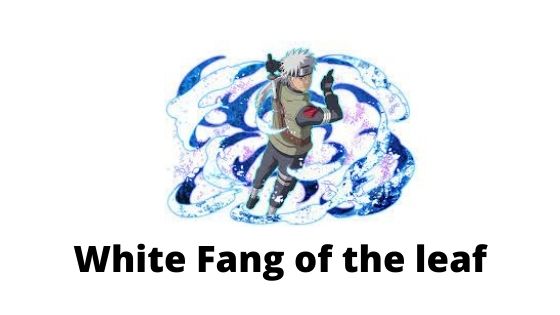 You are here: Home / characters / All about White fang of the leaf

All the naruto fans and the new ones who have started to watch Naruto, I am sure you all are or going to be the fan of Copy ninja Kakashi but how many of you know the family background of Kakashi Hatake especially his father Sakumo Hatake well known as the white fang of the leaf village.

Sakumo was renowned as one of the greatest fighters even more powerful than the Legendary Sannin, He was accompanied by a white chakra sabre, which made a white streak when swung, hence, he is named as White Fang of the leaf. Let us discuss why Sakumo Hatake is considered Konoha’s white fang what are his strengths, personality and much more about him in this wiki about White fang from Naruto.

Who is the white fang of the leaf?

White Fang of the leaf is Sakumo Hatake father of Kakashi Hatake who later on became the 6th Hokage of the leaf village.  Sakumo is a very powerful shinobi and is a good human being with exceptional fighting skills, Kakashi closely resembles his father Sakumo Hatake. We listed all about him in this article.

Sakumo Hatake is a man with a smiling face, he had spiky, silver-coloured hair that reached into the middle of his back tied in a ponytail and had dark eyes. Sakumo would always wear a standard Konoha-nin uniform with a pair of gloves, a flak jacket, and bandages on his right arm.

Sakumo also carried a holster worn diagonally over his right shoulder which held his Sabre. Kakashi has a resemblance to his father  Sakumo Hatake.

Sakumo Hatake is a very humble, kind, loyal man and a loving father. He often picks Kakashi his son at the end of the day after Kakashi was done playing with his friends and always thaugt Kakashi good things. Sakumo always respected his teammates can do anything for the life of their allies even if he would have to sacrifice the completion of a mission for the life of his team.

This single decision of abandoning the mission to save his teammates changed his life completely many were against it but some of them thought it was the right decision one example of this is Obito who greatly respected Sakumo for his beliefs that his comrades’ lives were to be placed before a mission or the rules of the shinobi. Sakumo is a perceptive man, He correctly predicted Guy to be a late-bloomer and his future growth as a ninja.

How strong was the white fang of the leaf?

Sakumo Hatake a.k.a white fang from Konohagakure was considered one of the most powerful shinobi, His enemies were even afraid of his name and never wanted to stand against him.

Sakumo was always praised for his ninja art and fighting abilities by many shinobis even by Minato Namikaze, the future Fourth Hokage. He was considered to be equivalent to the Sannin in terms of abilities.

Even the Fire Daimyo seemed pleased with Kakashi as the Six Hokage when he recognized him as Sakumo’s son which shows the trust and power of Sakumo Hatake and his family. The main reason for his power is his white light chakra blade that he uses during fights.

What happened to the White fang of the leaf village?

Sakumo Hatake or well known as the white fang of the leaf did suicide. The reason is that during one of his important mission for Konoha he chose to abandon the mission and save his teammates’ lives who were endangered.

The failure in the mission led to a loss for Konoha village so Sakumo was discredited which caused deep depression and later committing suicide. After the death of Sakumo, Kakashi lived his life with exact opposite rules that those who broke the rules are scum.

What did the White Fang of the Leaf do to Sasori’s parents?

During the war between hidden Sand and the Leaf Sakumo Hatake, The white fang of the leaf killed Sasori’s parents. This is the reason Chiyo attacked Kakashi as soon as she watched him as Kakashi resembles his father Sakumo Hatake.

What is white light chakra sabre?

White light Chakra Sabre is a straight-bladed tantō with a small, circular hand-guard that originally belongs to Sakumo Hatake which was later on passed to his son Kakashi. Whenever the blade was swung it gave off a white streak of chakra and thus making Sakumo known as the “White Fang of the leaf”.

Sabre was destroyed during the Third Shinobi World War during Kakashi’s fight with Kakkō.

In what episode does Kakashi meet Sakumo?

Chapter 415 of Naruto manga and Episode 159 of Naruto Shippuden – Kakashi and Sakumo Hatake is episode no. when Kakashi meets his father Sakumo.  After using his remaining chakra to save Chōji Akimichi from the Asura Path’s missile during Pain’s assault on Konoha, Kakashi died and he found himself in darkness with a single campfire.

Here his father greeted and invited him to share his life’s story with him.  Here they spoke about how they both died young. Kakashi talked about the sacrifice that Sakumo made for the village and Kakashi is proud of him and he forgives him.

As both Sakumo Hatake and Minato Namikaze are from different timelines so they never fought each other but if we tried to analyse their strength and power we can say that Minato aka Yellow Flash of the Leaf village can easily defeat Sakumo. As Sakumo has strength and a white light sabre with him for battle still he can’t defeat Minato’s Space-Time Ninjutsu, speed and Sage mode techniques.

Sakumo is a loving father to his son Kakashi. Sakumo always took care of Kakashi, He often picks his son at the end of the day after Kakashi was done playing with his friends. Once when Sakumo met Guy He told Guy to befriend Kakashi and play with him, this shows that Sakumo always cared about his son.

Hatake clan is one of the clans of Konohagakure village, The renowned members of this clan are Sakumo Hatake aka White fang of the leaf and his son Kakashi Hatake the copy ninja who later on became the sixth Hokage of the Hidden leaf village. The known heirloom of the clan is the white Light Chakra Sabre, which produced white chakra when swung.

Apart from manga and anime, Sakumo Hatake was part of Naruto Shippūden: Ultimate Ninja Blazing a video game that was released on 14 July 2016 in Japanese, and on 24 August 2016 in English.

Is the White Fang of the Leaf Kakashi’s father?

Yes, Sakumo Hatake is the father of Kakashi and Kakashi resembles his father very much and who saw Sakumo most of the time mistakes Kakashi with Sakumo.

Is Kakashi stronger than his father Sakumo?

Sakumo is one of the strongest ninjas and is even considered stronger than sannin but he has limited powers, on the other hand, Kakashi has Sharingan that copies many techniques and that gives the upper hand over Sakumo.

Is Sakumo older than Jiraiya?

Yes, Sakumo is older than Jiraiya as we know that Kakashi was 8 when Sakumo committed suicide and at that time sannin were a group of young ninjas at least 3 years younger than him.

How Old is Sakumo Hatake?

As per the manga or anime, there is no official proof of the age of Sakumo Hatake, We are assuming his age on the difference between his appearance and Kakashi in Pain’s Assault arc and that comes to be 38 at the time of his death.

Why is Sakumo Hatake called White Fang of the Leaf?

The answer to this question is very simple as he got the name for his skills, abilities and his use of a sharp knife-like weapon called white fang that emits white chakras when it is swung.

What were sakumo hatake abilities?

Sakumo Hatake was an amazing shinobi from the hidden leaf village, his abilities are considered superior to the sannin level and called a weapon master.

When was the white fang of the leaf first appearance?

The first appearance of Sakumo Hatake in the anime was in episode number 159 of Naruto Shippuden.

In this article, we explained all about Kakashi’s father Sakumo Hatake well known as the white fang of the leaf. Here we tried over best to give every detail about him and then write it in this article about him. Hope this article clears all doubts about this character from naruto anime.

All about Rock Lee

All about Loid Forger